This piece was placed in a large mixed exhibition containing many rooms.I came across it with the natural light facing me thinking it was a huge lamina placed on a balcony and only saw one side. In a way it was like a semi-sculptural extension of Katerina’s earlier paintings. The form was ambiguous, powerful and controlled the space around it. It suggested a large frieze stuck on its own somewhere on high and to me resembled the silhouette of a bunker. As I was facing the light the form looked dark and menacing, appearing to peer over the area. The colour was khaki-green, suggesting camouflage. This ‘wedge’ of found boxes (empty inside) actually had another equally important ‘wall’. Their depth and divisions like a pyramidal honeycomb containing small birds in happy ones or twos. You half expected them to give you a song. The lighting was very gentle suggesting dawn or dusk. The whole piece was now part bunker, part bird cage for a whole confined city.

The contrast of both sides was unexpected and impressive. From a silhouette of menace to a tightly organised aviary 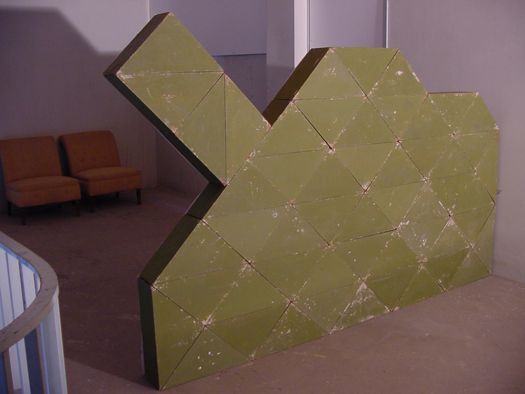 A Stroll In The City  / Untranslated Passage / Room 109